The materials listed on this page are the basic building blocks for a variety of thaumic tools and devices.

Infusing normal wood with a Vis Crystal creates Enchanted Wood, which is a component for many different Thaumic tools and devices. Using Greatwood logs in the infusion process is slightly more efficient than using normal wood and results in 5 enchanted wood instead of 4.

It is also possible to enchant Silverwood logs which results in Enchanted Silverwood - a rare and potent component used in certain devices.

Fusing together redstone and coal results in Alumentum which has several interesting properties.

Firstly it can be used as a fuel like normal coal, but it lasts 10 times longer.

It also seems to have the natural ability to absorb Taint making it useful in the construction of Vis Filters.

Combining Alumentum and Nitor in an Infuser creates an Arcane Singularity.

Arcane Singularities are highly energetic and highly unstable. The slightest jar will cause it to explode. The explosion rips open a tear in the fabric of reality, which draws in anything nearby and annihilates it.

Triggering an Arcane Singularity has a rather interesting effect on the local Aura...

You can use them as "Grenades", because of the explosion after you threw it. If you throw them too fast they trigger themselves and explode directly in front of you which kills you instantly.

Fusing together spider silk, wool and a Vis Crystal results in enchanted fabric. Excluding Tainted Crystals and Depleted Crystals, you can use all crystals for the infusion.

The fabric acts as a component for several interesting magical items, including the Portable Hole.

Fusing together a gold ingot, a vaporous crystal and a normal piston creates the Animated Piston. While it cannot be placed in the world like a normal piston would (it is far too skittish for that) it does make a useful component for certain magical devices.

Thaumium is a wondrous metal gained by infusing iron with most kinds of vis crystals. If you have some of the Forge mods installed like RedPower, IndustrialCraft or Forestry you can also infuse Bronze, Brass or Silver to gain Thaumium. Excluding Tainted Crystals and Depleted Crystals, you can use all crystals for the infusion.

Thaumium can be used to create armor or tools like normal iron and the tools or armor created lie about halfway between iron and diamond in terms of efficiency, durability and strength.

Where Thaumium really shines however is when a Thaumic Enchanter is used to enchant items made with Thaumium Ingots. Thaumium is capable of absorbing vast amounts of magic, making it extremely easy to enchant. As well, combining Thaumcraft with Tinkers' Construct will allow the Smeltery to produce Thaumium tool parts. These have the same "Writable" aspect as paper does, meaning that they can take a lot of modifiers.

These expensive, but powerful extracts embodies the purest essence of a vis crystal. They act as potent components in the creation of some of the more impressive thaumic constructs. Each extract is created from one of the 6 vis crystal types - the recipe is the same apart from the crystal used.

Cinderpearls are a strange, fiery flower found in deserts. If you harvest them, you get one Cinderpearl Pod, which can be ground to one unit of Blaze Powder. The pods are used along with one iron ingot to infuse a Charm of Cleansing.

Note should be taken that creating Soul Fragments in a dark infuser is highly inefficient - it is rumored that there are better ways to obtain them. One way is through the Soulstealer Enchantment. 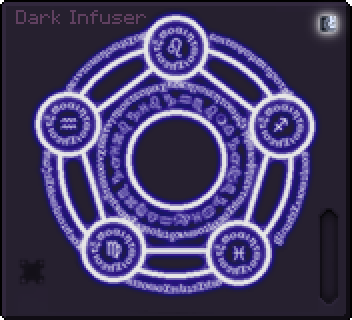 Retrieved from "https://technicpack.fandom.com/wiki/Thaumcraft_Raw_Materials?oldid=84401"
Community content is available under CC-BY-SA unless otherwise noted.