Klein Star(The Small Star) is an item that is part of the Equivalent Exchange mod. It stores EMC for use in Transmutation Tablet, Antimatter Relays, Energy Collectors, Dark Matter Furnaces, Red Matter Furnaces and for Power Items. Basically they act as an IC2 RE Battery for storing EMC. The Klein Stars can be used for Energy on Swiftwolf's Rending Gale. The Klein Star Omega is extremely expensive to make, requiring 1,024 diamonds and 8,192 Mobius Fuel(which simplifies to 65,536 coal, or 1024 stacks) to make a single one.

The Klein Star can be upgraded to various levels to allow for a greater amount of EMC to be stored. To upgrade the Klein Stars you place 4 on a crafting grid in a 2 X 2 shape.

Stored EMC is conserved between levels. Upgraded Stars not only store more EMC in a single slot, they also store given EMC faster - useful when you begin upgrading Relays and Collectors, as lower tiers may get backlogged.

As well as acting as an EMC battery, the Klein Star (more specifically, a fully charged Klein Star Omega) is used in several crafting recipes. This consumes the Klein Star(s) entirely, not just the contained EMC.

Once created, a Klein Star can't be broken up into raw EMC again. 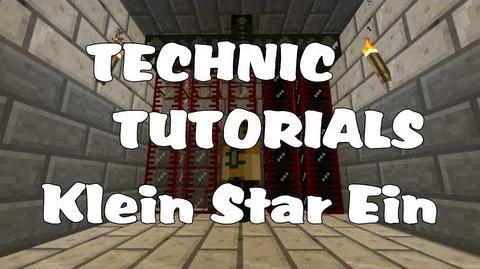 Any Item using emc will take it from the closest emc item Even if you do have a klein star.