Eldritch trees are inanimate mobs from the ThaumCraft mod that look like a darker version of the normal trees with fruit in the leaves until attacked.

Eldritch trees usually spawn at night in very dark locations. According to the Thaumcraft thread in the minecraft.net forums, they can only be found in Forests, but Eldritch trees have also been encountered in swamps, although rarely. Technically, they are being treated as immobile enemy mobs by the game. This has several implications:

Eldritch Trees must be engaged in melee; any arrows which hit them will "bounce", hitting (and hurting) the player rather than the tree.they will also not catch on fire. They have approximately 75 hearts, taking thirteen hits from an Iron Sword before dying. Once the player attacks the tree, it shivers upon being hit and several eyes appear on the bark. It also starts releasing several colorful, small, worm-like grubs that follow and attack the player. If killed, the grubs sometimes drop a "Grub Husk"

, an edible food item that looks a bit like a pepperoni. The Grub Husk is one of the few items that cannot be replicated in a Thaumic Duplicator.

If eaten, the grub husk may randomly grant you one of the following status effects:

and sometimes a piece of Eldritch Heartwood

. Eldritch Heartwood is one of the ingredients needed for crafting a Traveling Trunk. Using Arcane Tinkering Tools, the logs can be infused in the Vis Infuser to produce Eldritch Timber

, which is an important ingredient in many Thaumcraft crafting recipes. 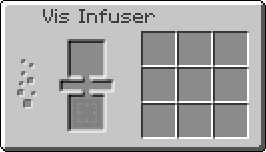 Retrieved from "https://technicpack.fandom.com/wiki/Eldritch_Tree?oldid=57155"
Community content is available under CC-BY-SA unless otherwise noted.