Start a Wiki
Eldritch Monolith also known as an Eldritch Obelisk, are landmarks from the Thaumcraft mod that spawn randomly in all types of terrain.

These dark edifices are a source of endless debate and mystery. Those brave souls who have ventured close tell tales of inhuman whispers, strange symbols and the remains of ancient temples. The surface of the monolith itself seems to reveal an inner world of endless and alien stars. It is said that should one gaze too long madness may result.

Below the Obelisk is a shaft made out of unbreakable Eldritch Stones which reaches to the very bottom of the map. Those Eldritch Stones themselves are seemingly indestructible and resist even the most sturdy of diamond pickaxes. (but they don't resist diamond Tunnel Bores. Testing done in Reccomended build 7.2.6 shows that a sapphire pickaxe and Void Crusher can harvest these blocks, allowing for you to make a spiral tunnel down to the secret chamber.)

At the very bottom of a shaft, right above the bedrock, is a small chamber that contains four Void Chests filled with a variety of Eldritch Artifacts and items like Void Ingots and Seeds of Darkness. You will need those items and artifacts to research and create powerful endgame items like Void Bracelets or Void Chests.

Sometimes, if you are lucky, one of the chests will have a Void Interface right on top of it (there is a Void Interface on the right chest in the screenshot at the right). The interface gives the Void Chest it is connected to a functionality similar to Ender Chest. When you right click on the interface, you can switch between the runes and see (and loot!) all chests linked to currently active rune.

WARNING: When you open a monolith, the Taint level in that chunk will rise. It gets worse after you open the four seals inside. Be prepared to deal with the Taint with mini Silverwood Trees(one block of Silverwood with one block of Silver wood leaf on top) or other methods. A chunk with closed monolith already has higher Taint than normal since the outside pillar generates some Taint constantly.

Directly below an Obelisk is a panel with four slots. Think of this as a lock to the shaft and the treasure room below for which you need four keys to open. The "keys" in this case are Vis Crystals (NOT the crystal ores!), which you need to equip and place with a right click in the right slot.

Every slot accepts only one specific type of crystal. If you place a wrong crystal, it will blow up right in your face, damaging and possibly killing you if you are already injured. You will also lose the crystal you placed.

However, if you have the Goggles of Revealing equipped, you can see four symbols hovering over the stone in the middle. Those symbols indicate which types of crystals you need to place. The picture on the right shows all symbols that can appear, from the top left to the right bottom right: Vis Crystal (Magic), Vaporous Crystal (Air), Aqueous Crystal (Water), Earthen Crystal (Earth), Fiery Crystal (Fire) and Tainted Crystal (Dark).

Once you have correctly placed all four crystals, the crystals, the slot stones and the middle stone will disappear in a puff of smoke and you will be able to access the shaft. However, ... 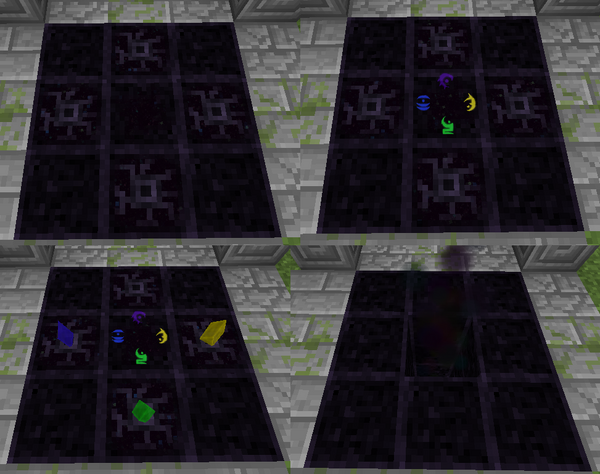 ... you should take some precautions. As the treasure room is situated at the bottom of the map right above the bedrock, you will, at the very least, fall over 50 blocks down - this will kill you, even if you are on full health and have a complete set of diamond armor equipped!

One of the easiest ways of getting down is to take about one stack of sand and place it right into the shaft. The blocks will fall down and then stack up. Once this 1x1 sand tower has arrived at the top of the shaft, you stand right on top of it and dig down. You can then proceed to loot the room (don't forget to take the Void Chests with you, too!). To leave, just jump and place the sand below you until you are at the top of the shaft again.

If you have Boots of the Meteor enchanted with feather fall equipped you can survive the fall quite easily - armor will allow you to reduce the level of enchantment on your boots.

Alternatively, you can equip a Sword of the Zephyr and just hop in. Getting out, however, requires both percision to hit the 1x1 opening, and the durability damage that comes with using its special ability.

Another very easy way to get down if you've used a fair amount of Equivalent Exchange is to use the Swiftwolf's Rending Gale as it negates all fall damage and allows you to fly as in creative mode. The Hurricane Boots will also work when equipped, but they are extremely costly to make.

IC2 Rubber Boots are also a good way to get down as they absorb most of the fall damage you would receive. The Quantum Suit is also a good method as it severly lessens fall damage.

Using an Electric Jetpack from IC2 is another way to get down, as you can slow yourself down when you're near the bottom. You can use the Y cords to see how far away bedrock is, and when to put on the brakes. This is also a method to get back up.

Another method is to make a bunch of ladders, and use a bucket of water at the top of the hole. Pick up the water as you jump down, and you'll drop slowly to the bottom. Afterwards, use the ladders to climb back up. This has the added bonus of leaving an easy way to access the chamber at later points in time.

The cheapest way of getting down is to tame a bird from Mo' Creatures, and wear it on your head. This will allow you to slowly fall down the shaft and take no fall damage. You will, however need to find a different way up after using this method, as a five-ounce bird cannot carry a 160-pound human!

Yet another option is to make a few ropes, then drop them down.

In Technic 7.2.6 version of Thaumcraft, the Eldritch Monoliths that you find are unbreakable except by using Block Breaker to totally destroy the monolith. They only go down two levels when you find them. The rest of the monolith is only generated after you open them. Then you can break the Eldritch Stone blocks as usual to make a stair down it if you want. Or sand/fly down, your choice.

The secret chambers inside the monolith are only generated after you open them. Using Creative mode to destroy the entrance to the secret chamber will not generate the chamber so you have just wasted a monolith spawn!

Be careful not to accidentally destroy the receptacle for the Eldritch Keystone. Testing shows sapphire pickaxes can do this, but they will totally destroy the block, leaving the chamber it would have spawned inacessable forever.

You can switch the Void Interface while in the chest to get the other items instead of unlocking another Obelisk (only in earlier version of Thaumcraft, in the later versions, the chests are created after you open the monolith, which means that you can only access previously discovered chest).

An Eldritch Monolith can be moved and duplicated by using 3rd party software such as MCEdit.

Methods of entry below:

Sword of the Zephyr.

and last but not least sand.
Add a photo to this gallery
Retrieved from "https://technicpack.fandom.com/wiki/Eldritch_Monolith?oldid=83734"
Community content is available under CC-BY-SA unless otherwise noted.