The Deployer will place a block from its inventory on the ground in front of it when given a Redstone signal. It also executes the action of items within it. For example, using a hoe on dirt to till it.

Another example, if you give it a cobblestone block and then a redstone signal it will place down that block in front of its ejection face. This makes it the direct opposite of the Block Breaker.

You can also use a Volcanite Amulet and Klein Star and power it to place down a lava source. If used in conjunction with Geothermal Generators, it can be employed as a component in a setup that creates an easy and reliable energy supply for Industrial Craft machines. You can do the same with water if you use an Evertide Amulet instead. Additionally, if empty buckets are placed in the deployer it will fill them if a water block is in front of it.

The deployer can also place bonemeal and saplings. This can be an alternate method of autofarming with the removal of Forestry. This combined with Treecapitator mod in the technic pack, can make a very quick and low cost tree farm.

Automatic wool farms can also be made, but these will require transposers to pick up the wool. Also note that the Equivalent Exchange shears do not work in deployers. Crafting the Deployer gives you the "Steve in a Box" achievement.

Cannons from Balkon's Weapon Mod can be aided by having a Deployer. The position is tricky, as the Deployer needs to be to the side of the cannon, and Cannons are a bit wider than a block -- but if you nudge (by gently shoving it) the cannon to the side a bit, the Deployer can be placed. Adjust the facing with a screwdriver, then load it with cannonballs and gunpowder. A timer pulse will stuff ammunition into it, allowing you to simply focus on aiming and shooting. 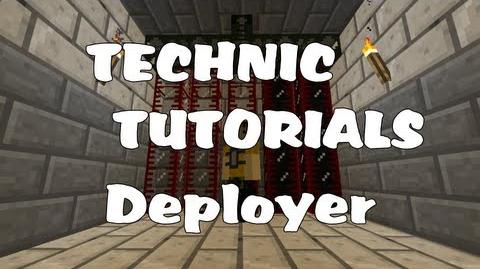