This article is about the flying birds from Mo' Creatures.

Mo' Creatures adds 6 birds to the game, Dove, Crow, BlueGrossBeak, Cardinal, Canary and Parrot. Each bird has it's own sound effect and and coloring, but other than that they are exactly the same.

Birds are skittish and will run from the player and any other mob. The player can tame birds by throwing seeds on the ground and standing back while the bird(s) eat them, then once the birds are close enough to the player, right clicking them with seeds equipped. On death birds will drop any seeds swallowed. Birds alternate from the ground to the trees, and while they have the ability to fly they tend to avoid it whenever possible. They have a distinctive hop, rather than walking like other mobs.

Once the player has tamed a bird, if right-clicked the bird will sit on the players head. While a bird is on the players head the player can jump from any height and drift slowly downward, with no fall damage. However walking under a block 1 space above head height will cause the bird to be killed. Also, if you are in the blast area of an explosion and would other wise take damage the bird will also take damage. To 'un-equip' the bird, just face up and right click the bird directly above you and it will be dropped again. 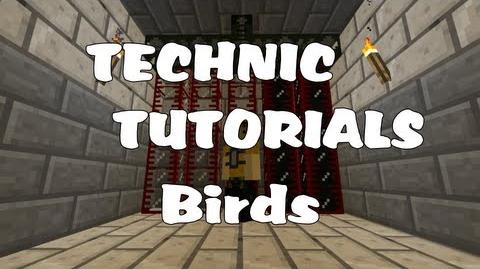