Artifacts are special items that are used for research.

Common Lost and Forbidden artifacts are uncommon drops from monsters.

Tainted Artifacts can be obtained from mobs, plants, and Tainted Logs inside a natural tainted zone.

Eldritch Artifacts can be obtained inside Eldritch Monoliths.

You can get almost all other artifacts with Relic Hunter Enchantment.

Exceptional Artifacts can be obtained only from naturally generated chests, such as those inside mineshafts, dungeons, and villages.

Ironicly, Diamond Blocks have a research value of 24, meaning that if you put a diamond block in each of the three slots on the left of the Quaesitum, you have a success rate of 72. If you have lots of Collectors and Relays, this is especially useful becuase you can gain Lost and Forbidden fragments from the blocks (Eldritch?). As a bonus, you can gain Tainted research fragments, which means you won't have to step foot into a Taint zone to get Tainted items to research (though Lost fragments are the most common). 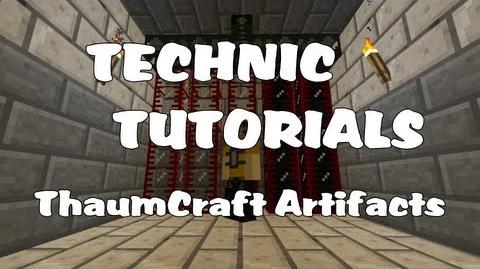